null A New Start for Technology

A New Start for Technology

Mitigating the Impacts of Continuing Resolutions on Research and Development

Authorization and appropriation acts permit the Government to spend a specified amount of funds for a provided purpose and duration.1 When Congress fails to pass these laws, however, a funding gap results.2 Funding gaps, or Government shutdowns, have plagued recent decades and significantly impacted the government’s ability to function normally.3 Usually in such cases, Congress passes temporary appropriation acts, called continuing resolutions (CRs), which permit the Government to fund existing programs and activities at the same rate of operations; however, CRs generally prohibit new programs and activities.4 This, in turn, impedes the effective and efficient funding of new technologies crucial for the Department of Defense (DoD) to keep pace with near-peer adversaries. This article explores the detriments of funding gaps and CRs and proposes that CRs routinely authorize the funding of new programs for research, development, test, and evaluation (RDT&E).

Detriments of Funding Gaps and CRs

Authorization and appropriations laws fund the DoD annually, but in the last twenty years, Congress enacted only five appropriations laws prior to the start of the fiscal year.5 During a funding gap, the Government must shut down all funding unless it supports emergencies that “imminently threaten the safety of human life or the protection of property.”6 Continuing resolutions are a stop-gap measure to prevent this scenario by temporarily funding existing programs.7

Continuing resolutions are problematic in their own right. Generally, CRs prohibit “new production,” “the increase in production rates above those sustained with [prior fiscal year] funds,” or “the initiation, resumption, or continuation of any project, activity, operation, or organization . . . for which appropriations, funds, or other authority were not available during [the prior] fiscal year.”8 In the continued absence of appropriations laws during CR periods, Congress often must enact consecutive CRs extending well into the fiscal year, which creates even more uncertainty.9

More than just one-year funds, such as Operations and Maintenance, funding gaps and CRs also prohibit the initiation of “multi-year procurements utilizing advance procurement funding.”10 Thus, two-year appropriations—like RDT&E—also suffer from CRs.11 Although Congress can approve “anomalies” as exceptions to these general prohibitions, they do so only for high-visibility, high-cost projects; even then, they meet significant and prolonged resistance when staffed through DoD leaders, the DoD Comptroller, Office of Management and Budget, and Congressional appropriations committees.12 In recent years, DoD anomaly requests for new starts and production rate increases have increased exponentially; yet, they are often entirely omitted from CRs.13

As a result, contracting officials must delay obligations for scheduled contracts, which burdens contracting officials with heavy workloads at the end of a fiscal year, interrupts programs, and results in higher contractor costs as they price-in the risk of unknown obligations.14 Many senior level officials have decried the use of CRs.15 Former Secretary of Defense James Mattis testified to Congress that CRs raise costs; deteriorate ship and aircraft manufacturing and maintenance; delay construction; deplete ammunition, training, and manpower; and delay contracts required to modernize at a rate competitive with our near-peer adversaries.16 Despite the President’s and Congress’s stated desires to aggressively pursue new technologies, CRs by their very nature prevent innovation by requiring agencies to do only what they did the prior year.17

If the United States is to remain competitive with near-peer adversaries, lawmakers must lessen the impacts of funding gaps and CRs on the acquisitions, research, and development processes. Although the simplest solution is to pass timely appropriation bills, the politicization of these bills has rendered this an unreliable approach.18

A DoD-wide exemption permitting funding for new programs under CRs is similarly untenable—and against constitutional principles.19 First, Congress should not abrogate the constitutionally vested power of the purse by funding new DoD programs blindly and without debate. Although Congress would—arguably—be authorizing specific programs presented in DoD budget requests, the idea risks the appearance of granting constitutional power of the purse to the executive branch.20 At the very least, the broad scale and potentially unlimited duration of such an exemption weakens congressional oversight.21

Ideally, then, a solution lies somewhere between giving the DoD free reign over the power of the purse and subjecting the DoD and our national defense to Congress’s disruptive political whims. As Congress and the DoD both emphasized the importance of technological development, RDT&E seems a natural focus for this compromise.

Congress should exempt all RDT&E appropriations from new start prohibitions in all CRs. Notably, this provision would not give the DoD free reign; Congress could still prohibit specific RDT&E programs if desired. As the DoD already submits budget requests each year, Congress has full visibility over the RDT&E programs the CR would fund. Congress would exercise more control and oversight by examining only this slice of appropriations, instead of exempting new starts across the entire DoD budget. Moreover, continued debate over most military programs, as part of other appropriations, would still incentivize timely, controlled appropriations bills. Rather than presume exclusion for RDT&E programs, this provision would presume authorization—in line with national priorities for technological overmatch.

Furthermore, Congress should explicitly declare its intent to make RDT&E new start exemptions a regular feature of future CRs. This expression of intent will provide the DoD and contractors the political stability required to focus on continuous and rapid development of current and new technologies at more reasonable costs.

A CR exemption for RDT&E start-ups balances incentives for timely appropriation bills with the need to fund new technologies. Continuing resolutions should not be the norm, but, given their historical frequency and duration, a solution must encompass the reality of CRs. Congress can enact CRs permitting new RDT&E programs so long as political support for technological development remains bipartisan. The cost and operational impacts of interruptions and delays for general military programs would still incentivize timely appropriations legislation, but at least the national priority for technological dominance would survive the thrashing. TAL

Maj Ely is a program counsel at the Air Force Materiel Command Law Office at Wright-Patterson Air Force Base, Ohio. 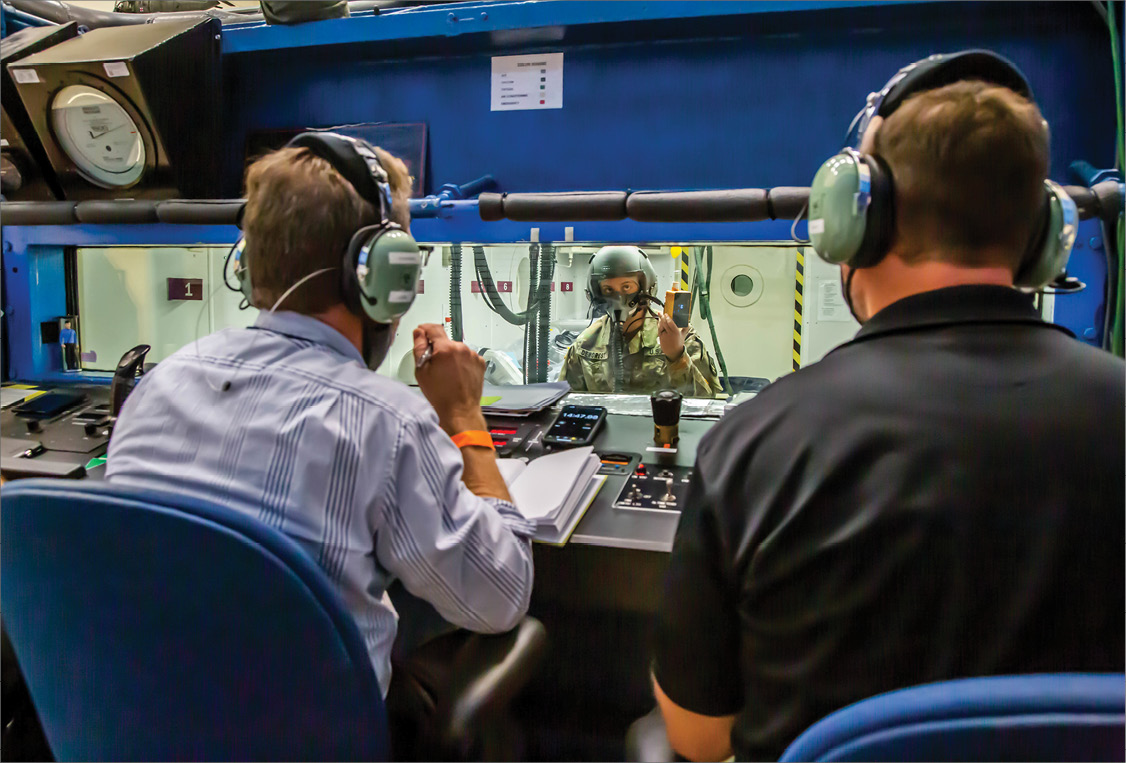 The U.S. Army Aeromedical Research Laboratory collaborates with the U.S. Army School of Army Aviation Medicine to conduct testing inside their man-rated altitude chamber. The goal of this effort was to test three patient isolation units (PIUs) to determine if they will operate correctly when exposed to simulated altitudes from ground level up to 18,000 feet. (Credit: Scott C. Childress)

13. Towell et al., supra note 12, at 6 (noting the first 3 continuing resolutions (CRs) for fiscal year 2018 permitted no anomalies despite Department of Defense requests for 115 programs, and the fourth CR for that year contained only 1 anomaly).

16. The National Defense Strategy and the Nuclear Posture Review: Hearing Before the H. Comm. on Armed Servs., 115th Cong. (2018) (statement of Sec’y of Def. James Mattis).

17. Donald J. Trump, U.S. President, National Security Strategy of the United States of America 21 (2017) (stating the intent to “regain the element of surprise and field new technologies at the pace of modern industry”); S. Rep. No. 115–125, at 191 (2017) (advising agreements officers to “use a variety of established acquisition tools, including a modification to the original consortium-based or individual prototype project award, a separate [other transaction authority], or a [federal acquisition regulation] acquisition instrument” to “allow for a swifter, seamless transition of cutting-edge technologies to the warfighter”). See U.S. National Security Challenges and Ongoing Military Operations: Hearing Before the S. Comm. on Armed Servs., 114th Cong. (2016) (statement of Sec’y of Def. Ash Carter).