From Yonker to the Army's People First Task Force

Let’s start from the beginning. How did this journey of service start for you?

Well, it started well before I ever joined. I was born in Yonkers, New York—do I need to specify the year?

That’s unnecessary, Sergeant Major. We all know you were at least 18 and, if we add in your 28+ years of service, we will settle for you having been born sometime in the 70s . . . .

Ok, so I was correct. And your journey?

My dad, then serving in the New York National Guard, decided to go active duty shortly after my birth. My entire childhood was surrounded by the Army after that, and I knew early on that I was going to join the Army. I looked up to my dad, and I wanted to be like him. As a kid, I’d wear uniforms and even had my own set of TA-50. While in high school I enjoyed music and wanted to pursue studies in music; however, my thoughts about what I wanted to do with my life changed a little. A girl had come into the picture, and I figured that if I wanted to marry her, I needed a job, so I enlisted.

Did you ever see yourself staying around this long?

I actually didn’t. I came in with the idea that I would do my twenty years and retire. There were points in my career that I wanted to quit, especially as a young specialist and junior NCO. After my first son was born though, I was sold on the Army and knew that I was staying, but twenty-eight years never crossed my mind—it happened so fast.

In those twenty-eight years, what would you say was your hardest day in the Army thus far?

(Referring to the death of a deployed teammate who was killed by an IED explosion in Afghanistan) Simple, 20 May 2009. Life is short.

What about one of your best memories?

There are so many, but one that is at the top has to be completing the Jumpmaster Course—it’s something that I’ve always wanted to do but didn’t get a chance to do it until I was a sergeant major. Completing the course is at the top of the list of my best memories, not because of anything I did, but more so because of those who helped make me successful. So many folks helped get me through the course, and even after completing the course, the entire JAG Community on Fort Bragg continued to support me while I “chased” my Senior Parachutist Badge. I had only about three months to complete all of the requirements for the badge after completing the course and before reporting to the Office of The Judge Advocate General (OTJAG). On my last jump, I had the privilege of serving as the Primary Jumpmaster for an aircraft full of JAG jumpers—all there to support me.

That’s phenomenal. A great example of setting goals and knocking them out, no matter how delayed they may seem. The time is always NOW.

Speaking of goals, you’ve been holding down three full-time positions over the last few months—what is your secret? How did you handle it without giving up on yourself, or the mission?

There have been challenges in holding down the different positions, but the teams around me have been the secret. Everyone has been understanding and done more, collectively, so that I could do more individually. The teams at OTJAG, USALSA, and PFTF have been instrumental during this time.

Congratulations again on being selected for the position in PFTF—that’s a pretty big deal. What exactly does this new responsibility entail?

Well, the PFTF “[i]ntegrates HQDA-wide response, reform, and implementation of policy, programs, and directives to ensure the safety, health, and well-being of its People.”1 So, as the sergeant major, I will be charged with serving as the advisor for the Army’s senior leaders, leaders in the field, and for the Director of the PFTF. As the task force develops plans for the way ahead, I will be part of ensuring that Soldiers and junior leaders are not forgotten and that they get what they need in order to ensure they can meet Army senior leaders’ desire with what “People First” means.

If you could go back in time and tell Private Martinez, or even a young Lieutenant Martinez, three things he should know about how to be successful in the Army and/or JAG Corps, what would you say?

I can’t let you leave without asking if you want to give any shout-outs or thank-yous to anyone who contributed to your success or played a part in your reason to stay.

Chief, this is hard. There have been so many folks out there who have contributed to my success, and I don’t want to leave anyone out. I’ll do it this way:

If we’ve worked together at any point, thank you for allowing me to serve alongside you. Know that each of you have contributed to me becoming who I am today. It has been my honor to stand in formation with you.

To my leaders, thank you for seeing beyond my faults and forcing me to always do more, and to do better.

To my family, wife, kids, and parents, thank you for your support and for allowing me to serve freely. Thank you for always being proud of my accomplishments and for being there during my failures and helping me to get back up.

To God, thank you for your mercy and blessings. There is only one way a kid from the projects of Yonkers, New York, who calls Leesville, Louisiana, home, could make it to the E-Ring of the Pentagon—His blessings. TAL 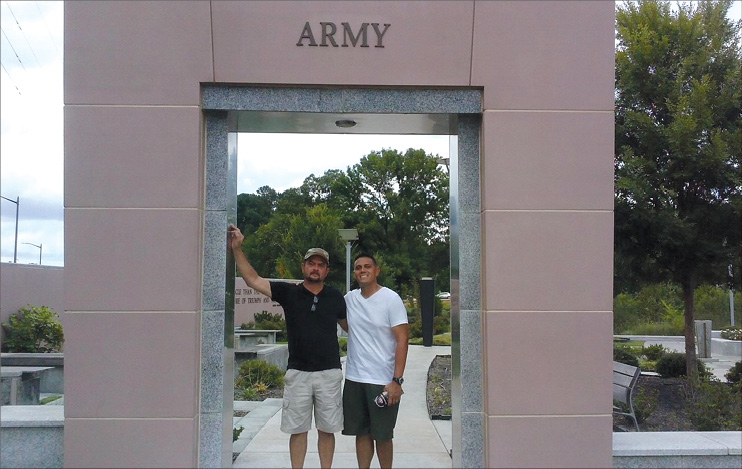