In 1967, Navy Lieutenant Nancy A. Hunter transferred from the Navy Supply Corps to the Army Judge Advocate General’s (JAG) Corps. This alone was a “first” in history, in that no female naval officer had ever entered our Corps through an inter-service transfer. But more “firsts” were to follow in Nancy Hunter’s career as an Army lawyer. Over the next five years, then-Captain (CPT) and later-Major (MAJ) Hunter became the first female judge advocate (JA) to be certified as a trial judge and the second female JA to serve in Vietnam.1 When she left Southeast Asia, she was awarded the Bronze Star Medal—yet another first for a woman in the Corps. While teaching administrative and criminal law as the first female member of the Corps on the faculty of The Judge Advocate General’s School (TJAGSA), Hunter also was the first woman on the faculty to earn a Masters of Law at the University of Virginia while assigned to TJAGSA. When she retired as a lieutenant colonel (LTC) in 1979, Nancy Hunter had completed a truly remarkable career. 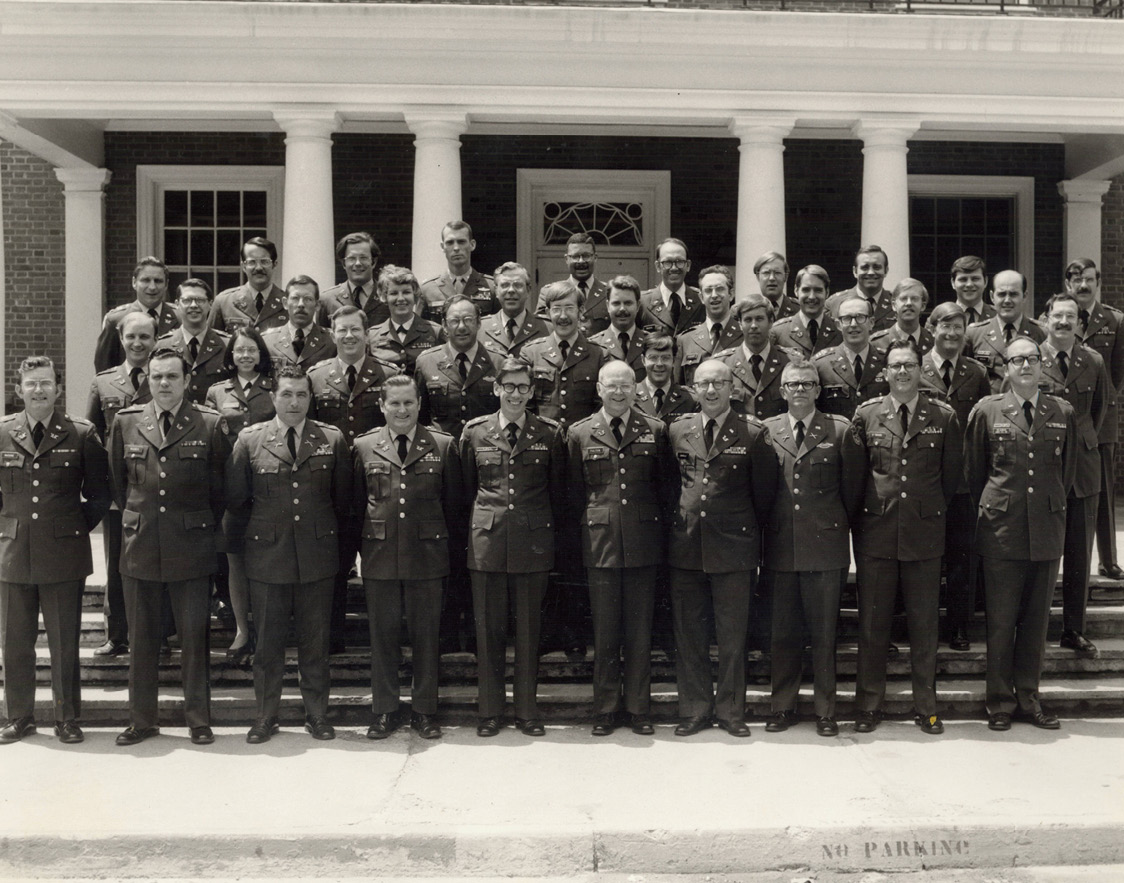 Born in Dearborn, Michigan, Nancy Anne Hunter (née Petrick) went to high school in Cheyenne, Wyoming. For some years, as a “good Catholic girl,” she wanted to be a nun. Then, as she put it, “I discovered boys and beer.”2 After finishing high school early, 16-year-old Hunter started college at the University of Wyoming in 1956. A year later, she was in college at Columbia University in New York City. While she liked Columbia, she discovered that she did not have the money to finish her education in New York; so, she moved to Colorado, where her mother was living. She then enrolled in nearby University of Colorado in Boulder.3

Hunter managed to complete her degree in 1959, graduating with a degree in business—although she had focused her studies on accounting. She wanted to work as an accountant and had an interview with Texaco on the Colorado campus. Imagine her surprise when the man conducting the interview told her that she could “never have a career as a woman accountant” and would “get further ahead as an executive secretary.”4 Hunter was so angry at the end of the interview that she marched across the street to the Navy Recruiting Station and enlisted. She was nineteen years old.5

Almost three years later, in May 1963, then-Lieutenant (Junior Grade) Hunter reported to Alexandria, Virginia, to assume duties as a budget and program analysis officer for the Contract Administration Services (CAS). While working full-time at the CAS, Hunter decided to enroll in Georgetown University’s night law school program, which permitted a student to complete a law degree in four years—this meant two hours of class every day, five nights a week.6

Lieutenant Nancy Hunter was Navy Supply Corps officer prior to her inter-service transfer to The Judge Advocate General’s Corps in 1967. (Photo courtesy of author)

At the time, Virginia permitted a law student to sit for the bar examination before graduating from law school, and Nancy Hunter decided to take advantage of this provision. As a result, she took and passed the Virginia bar examination in Roanoke, Virginia, in August 1966.

Based on the September 1966 letter, Nancy Hunter intended to reapply for a transfer to the Restricted Line after she earned her law degree in May 1967. Imagine her dismay when she received a second letter, dated 1 November 1966, informing her that a law degree would not be sufficient: she still would not be permitted to use her talents and skills as a lawyer in the Navy—because she was a woman. As the letter explained, “women officers are restricted in their duty assignments to the extent that they may not serve aboard combat ships or aircraft.”9 Consequently, because “there appears to be no requirement or justification for women officers being designated as restricted line specialists,”10 any request to transfer to the Restricted Line for Special Duty (Law) would be denied.11 In short, the Navy did not want female lawyers in naval uniforms.

Having served eight years as a naval officer—and having enjoyed her time in uniform—Nancy Hunter was not happy with the Navy’s decision about her future. Luckily for her, someone in the Army JAG Corps heard about her predicament and suggested that she apply for a commission as an Army lawyer. Lieutenant Hunter quickly filled out paperwork for an inter-service transfer and, when the Navy did not object, Navy Lieutenant Hunter became Regular Army CPT Hunter. Officially, she was a member of the Women’s Army Corps (WAC), with detail to the JAG Corps. But this status meant that CPT Hunter wore crossed-pen-and-sword insignia on the lapels of her uniform. At the time, there were fewer than ten women on active duty in the Army JAG Corps.12 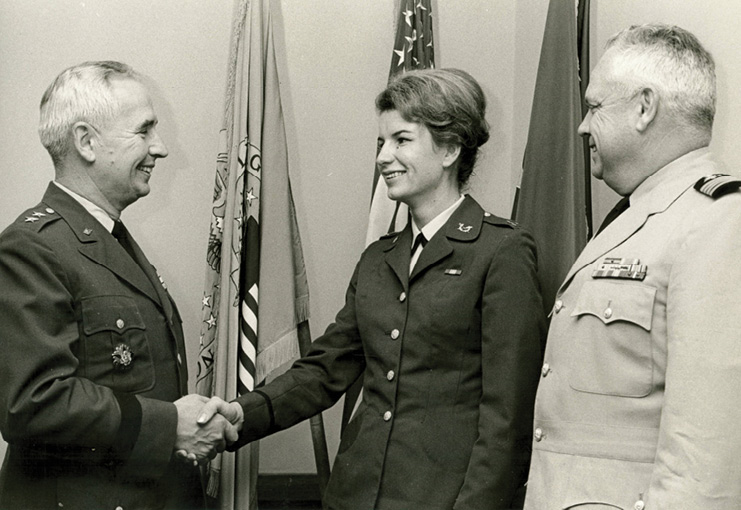 Captain Nancy Hunter’s inter-service transfer from the Navy to the Army is unique in JAG Corps history. In this photograph, taken in 1967, she wears an Army uniform and crossed-sword-and-pen insignia for the first time. (Photo courtesy of author)

Some years later, when asked why she left the Navy for the Army, Hunter was gracious enough to reply that she “felt there were greater opportunities for [her] in the Army.”13 Certainly a true statement, but not the whole truth.

After a two-week orientation for new WAC officers at Fort McClellan, Alabama, now-Captain Hunter reported to Charlottesville, Virginia, for the 47th Judge Advocate Officer Basic Course. When she graduated in 1967, she reported to Camp Zama, Japan. Serving as the Claims Judge Advocate, Hunter was responsible for the administrative processing of all Army claims in Japan. This meant roughly $3,000 to $4,000 a month to military claimants—a sizable amount when one remembers that in those days a private made $102 a month.14 Part of her duties included paying claims involving lost and war-damaged personal effects of Soldiers who had been wounded in Vietnam and were recovering in one of the four major Army hospitals in Japan.15

In July 1970, now-MAJ Hunter returned to the United States and Charlottesville, where she completed the Military Judge Course. She had asked to be a military judge because she liked criminal law and, after the enactment of the Military Justice Act of 1968 and the creation of the military judge position, the Corps needed trial judges—especially for special courts-martial. Consequently, when MAJ Hunter volunteered to be a judge, it made sense for her to be sent to the course.16

A month later, on the last day of August 1970, Hunter deployed to Vietnam for a twelve-month tour of duty as a special court-martial judge. She asked to be assigned to Vietnam because, as she put it, “the war was going on and [she] wanted to serve—that’s what people were doing who were in the service.”17

Assigned to the 4th Transportation Command, a 5,000-Soldier unit conducting operations throughout Vietnam, MAJ Hunter’s primary duty was to serve as a military judge. But she also functioned as a “Command Judge Advocate . . . managing an under-strength and overworked staff efficiently and effectively.”18

Despite her command judge advocate duties, MAJ Hunter presided over some sixty special courts-martial over the next twelve months. Her superiors were effusive in their praise of her abilities in the courtroom. Colonel Paul J. Halin, who endorsed her officer efficiency report in November 1970, wrote that “she presides as a judge in outlying areas and has been most successful obtaining the respect and admiration of her contemporaries for her professional acumen.”19 Judge Advocate LTC Thomas E. Murdock, who was the general court-martial circuit judge with overall responsibility for military judges in Hunter’s area of operation, was just as complimentary. “Her calm manner and wise decisions and rulings,” he wrote, “earned for her the respect and admiration of all attorneys appearing in her court, as well as the commanders in areas where she presided.”20 Perhaps more importantly, wrote Murdock, Hunter “actively sought opportunities to try cases in remote areas where facilities were often less than adequate, and security questionable.”21

At the end of this assignment, MAJ Hunter was awarded the Bronze Star Medal—apparently the first female JA in history to be so decorated. She was the second female JA to serve in a combat zone since World War II.22 This entitled her to wear two Overseas Service Bars on the lower right sleeve of her Army green uniform coat.23

In August 1971, MAJ Hunter reported for duty at The Judge Advocate General’s School. As she remembers it, the assignment was offered to her and she welcomed it until she arrived at TJAGSA and was put in the Civil Law Division. This made no sense to MAJ Hunter. Why was she not assigned to the Criminal Law Division?

Someone in authority must have seen her handiwork as, a short time later, MAJ Hunter was moved to the Criminal Law Division. She served in that division as the Senior Instructor and Assistant Chief until July 1975. Her boss was then-LTC Hugh Overholt. He would later serve as The Judge Advocate General from 1985 to 1989.

While teaching criminal law, MAJ Hunter enrolled in the Master of Laws program at the University of Virginia (UVA). She was awarded her LL.M. degree on 26 May 1975, just prior to departing TJAGSA for her next duty station. While many faculty at TJAGSA and The Judge Advocate General’s Legal Center and School have earned an LL.M. from UVA, Nancy Hunter was the first female JA to earn an LL.M. in this manner.25

When she left Charlottesville in 1975, MAJ Hunter was viewed “as one of the best instructors”26 and implemented changes in the curriculum that “prepared criminal law instructors and students to meet their new responsibilities.”27 She also was widely known as an expert on plea bargaining and published an article titled A New Pretrial Agreement in The Army Lawyer.28

Now certified as a general court-martial judge, MAJ Hunter reported for duty at Fort Ord, California.29 From then until she retired in 1979, she presided over both general and special courts-martial. One trial, the court-martial of Private (PVT) Charles Gretches, stands out—not because of the crime, which was Absent Without Leave for more than ninety days—but because of those who participated in the proceedings. The trial counsel was then-CPT Thomas J. Romig, who was attending law school under the Funded Legal Education Program (FLEP). The defense counsel was FLEP CPT Scott C. Black. Major Walter B. Huffman, the senior defense counsel at Fort Ord, was assisting CPT Black. Romig, Black, and Huffman would all go on to serve as Judge Advocates General: Huffman from 1997 to 2001, Romig from 2001 to 2005, and Black from 2005 to 2009.

Having served a combined twenty years in the Navy and the Army, LTC Hunter elected to retire in 1979. Today, she lives in California and is active in her community. It seems unlikely that any JA in the future will be able to duplicate her number of “firsts” in a career. TAL

Mr. Borch is the Regimental Historian, Archivist, and Professor of Legal History and Leadership at The Judge Advocate General’s Legal Center and School in Charlottesville, Virginia.

1. Major Ann Wansley was the first female judge advocate to deploy to Vietnam.