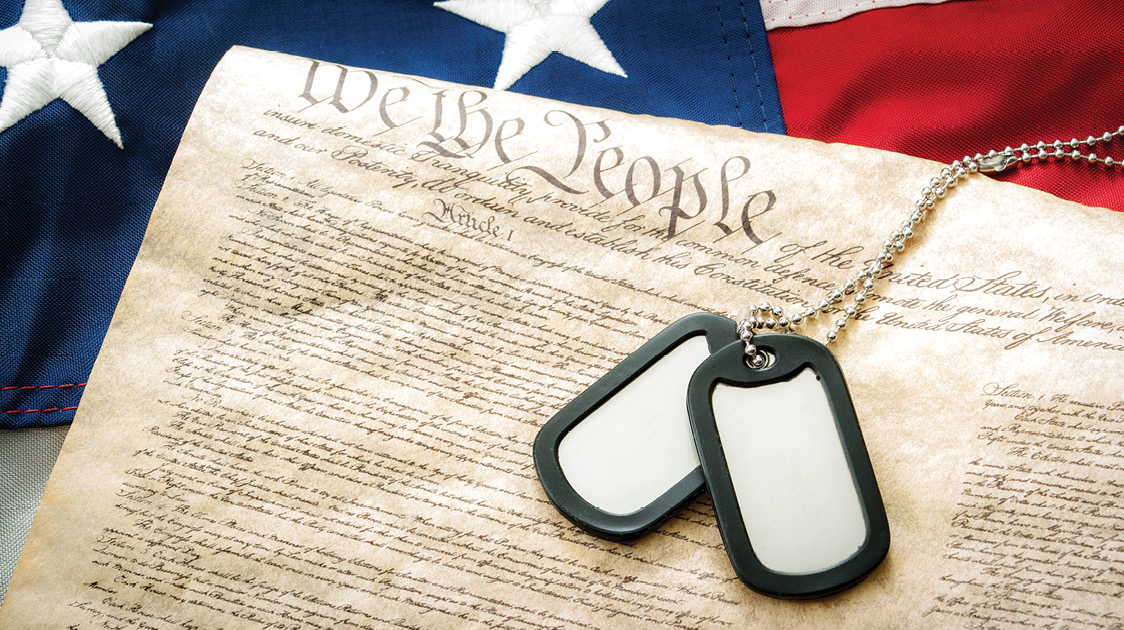 Why the Military Must Train Service Members in the Constitution

The violent assault on the U.S. Capitol in January 2021 was a shocking and disgraceful spectacle. This horrendous act resulted in the first breach of the Capitol since the War of 1812,1 and, in addition to a tragic loss of life, it involved something far more insidious: a direct assault on the U.S. Constitution. Those who participated in the assault aimed to stop the counting of electoral votes by the Vice President in a joint session of Congress—as required by the 12th Amendment.2 Perhaps unsurprisingly, those who participated in this assault included an assortment of extremists and conspiracy theorists.3 More astounding, however, is the revelation that one in five of those arrested and charged for their involvement were active or former Service members.4

The Constitution has been both the foundation and purpose of military service since 1789.5 Every American Service member swears an oath that begins with a pledge to “support and defend the Constitution of the United States against all enemies, foreign and domestic” and “bear true faith and allegiance to the same [Constitution].”6 This solemn pledge demands a willingness by Service members to sacrifice their own lives if necessary—not for a leader or a flag, but for the ideals contained in this sacred document. While Service members receive regular training in everything from basic military skills to safeguarding personally identifiable information, they receive no formal training in understanding the very document that the military exists to protect.7

This lack of knowledge about the Constitution’s design and structure, coupled with the zeal instilled and training provided by military service, is a potentially dangerous combination. This is evidenced by growing concerns about the rise of extremist and anti-government ideology within the armed forces.8 Such ideology is often couched in patriotic terms, making Service members a prime target for recruitment and indoctrination by extremist organizations. In an unprecedented move, the members of the Joint Chiefs of Staff released a message to the joint force calling the attack on the U.S. Capitol a “direct assault on the U.S. Constitution . . . and our Constitutional process” and reiterated that “any act to disrupt the Constitutional process is not only against our traditions, values, and oath; it is against the rule of law.”9 That top military leadership felt compelled to publicly reemphasize the military’s commitment to the Constitution, and remind Service members of their oaths to it, underscores the importance of educating the military in the Constitution’s contents.

This was driven home for me in an encounter I had with a young Marine last year. The Marine casually tossed around words like “treason” and “tyranny” to describe various restrictions enacted by state governors in response to the Coronavirus Disease 2019 pandemic. In support of his position that the Founding Fathers would have already gone to war in response to similar restrictions on liberty, the Marine selectively quoted lines from the Declaration of Independence10 and liberally invoked “We The People” from the Preamble to the Constitution.

I pulled him aside and, not-so-gently, counseled him that advocating war over domestic political disagreements is not something Americans do, let alone Marines who swear an oath to the Constitution. I walked him through the structure of the Constitution and the separation of powers; explained federalism and the 10th Amendment; and listed the numerous checks and balances that the Framers specifically built into our system of government to safeguard it against tyranny. I concluded by explaining to him that the Constitution provides remedies for Americans to respond to poor governance or unpopular laws, including the voting booth and peaceful protests—not the battlefield. The Marine apologized profusely and said it was the first time he was told that. His patriotism was sincere, but his zeal was totally misguided.

Sadly, this is not the first Service member I have encountered in my career whose well-meaning—but uninformed—beliefs about the Constitution and government tyranny could have metastasized into the same sort of extremist, anti-government beliefs that motivated some of the veterans who participated in the breach of the U.S. Capitol. One of those veterans—a retired Air Force lieutenant colonel, photographed with flex cuffs—posted on social media about his preparations for a “Second Civil War” against a “hostile governing force,” and concluded a similar post by reciting a portion of his former oath: “Against all enemies foreign and domestic.”11 Other anti-government organizations, such as the Oath Keepers—whose members were present inside the Capitol, actively recruit current and former Service members with care packages12 containing conspiratorial warnings about the Federal Government’s plans to use the military to deprive Americans of their constitutional rights.13

How does a Service member so badly misunderstand the Constitution (and their oath to it) that they use it as justification for a violent raid on a constitutionally-required joint session of Congress or a war against the very government the Constitution establishes? Many factors are possible, but surely one of them is the military’s failure to properly educate Service members on the basics of what the Constitution does and does not say. Such training need not be onerous or detailed, but should at least provide an overview of the three co-equal branches of government, separation of powers, federalism and states’ rights, the Bill of Rights, and the amendment process. The training need not be conducted annually; however, it should be required at regular intervals that coincide with a Service member taking the oath of office or enlistment—such as at enlistment or commissioning and subsequent re-enlistments or promotions. Finally, such training need not transform riflemen into constitutional law experts, but it should be enough to inoculate them against the efforts of those who would deceive them about what the Constitution actually says and requires of the few who have sworn an oath to defend it.

In his first annual address to Congress, President George Washington emphasized the importance of educating the American public in the newly-ratified U.S. Constitution in order to promote their confidence in their new government and enable them to distinguish between unconstitutional “oppression and the necessary exercise of lawful authority.”14 Service members are not only members of the American public, but sworn guardians of the Constitution, trained in violence to defend it “against all enemies, foreign and domestic.” Failing to train Service members in the Constitution itself risks allowing it to serve as little more than a totem for the preexisting beliefs and values of individual Service members, regardless of the accuracy of those beliefs. Worse yet, it risks the resulting vacuum of knowledge being filled with misinformation and exploited by any number of malign actors or groups.

Ignorance of the Constitution is hardly unique to Service members. A recent survey of American adults showed that 33 percent of respondents could not name a single branch of the U.S. Government, and 37 percent were unable to name a single right protected by the First Amendment.15 However, where the risks of constitutional illiteracy concern those who have been trained and entrusted with the security of our nation, an ounce of prevention is worth a pound of cure.16 TAL

LtCol Douvas is the Vice Chair of the Criminal Law Department at The Judge Advocate General’s Legal Center and School in Charlottesville, Virginia.

1. See AOC Curator, A Most Magnificent Ruin: The Burning of the Capitol During the War of 1812, Architect of the Capitol: Explore the Capitol Campus (Aug. 22, 2012), https://www.aoc.gov/explore-capitol-campus/blog/most-magnificent-ruin-burning-capitol-during-war-1812.

4. Tom Dreisbach & Meg Anderson, Nearly 1 in 5 Defendants in Capitol Riot Cases Served in the Military, NPR (Jan. 21, 2021, 3:01 PM), https://www.npr.org/2021/01/21/958915267/nearly-one-in-five-defendants-in-capitol-riot-cases-served-in-the-military (“Of more than 140 charged so far, a review of military records, social media accounts, court documents and news reports indicate at least [twenty-seven] of those charged, or nearly 20%, have served or are currently serving in the U.S. military. To put that number in perspective, only about 7% of all American adults are military veterans, according to the U.S. Census Bureau.”).

7. U.S. Dep ’t of Def. U.S. Constitution Day, https://constitutionday.cpms.osd.mil/ (last visited Mar. 2, 2021). Notably, federal law “requires Federal agencies to provide new employees with educational and training materials on the U.S. Constitution as part of the new employee orientation materials; and provide all Federal agency employees educational and training materials on the Constitution on September 17th.” Id. That said, this author has never received any such training or materials in over fifteen years of active duty service. See also Ken Harbaugh, The U.S. Military Is Not Ready for a Constitutional Crisis, Atlantic (Feb. 11, 2020), https://www.theatlantic.com/ideas/archive/2020/02/us-military-not-ready-constitutional-crisis/606367/.

9. Memorandum from Joint Chiefs of Staff to Joint Force, subject: Message to the Joint Force (12 Jan. 2021).

10. “But when a long train of abuses and usurpations, pursuing invariably the same Object evinces a design to reduce them under absolute Despotism, it is their right, it is their duty, to throw off such Government, and to provide new Guards for their future security.” The Declaration of Independence para. 2 (U.S. 1776).

By convincing those who are entrusted with the public administration, that every valuable end of Government is best answered by the enlightened confidence of the people: and by teaching the people themselves to know and to value their own rights; to discern and provide against invasions of them; to distinguish between oppression and the necessary exercise of lawful authority; between burdens proceeding from a disregard to their convenience and those resulting from the inevitable exigencies of Society; to discriminate the spirit of Liberty from that of licentiousness, cherishing the first, avoiding the last, and uniting a speedy, but temperate vigilance against encroachments, with an inviolable respect to the Laws.

16. The saying “an ounce of prevention is worth a pound of cure” is widely attributed to Benjamin Franklin, who wrote an article on the importance of improving firefighting techniques with a particular focus on prevention. Benjamin Franklin, On Protection of Towns from Fire, 4 February 1735, Pa. Gazette, Feb. 4, 1734, at 5, https://founders.archives.gov/documents/Franklin/01-02-02-0002.