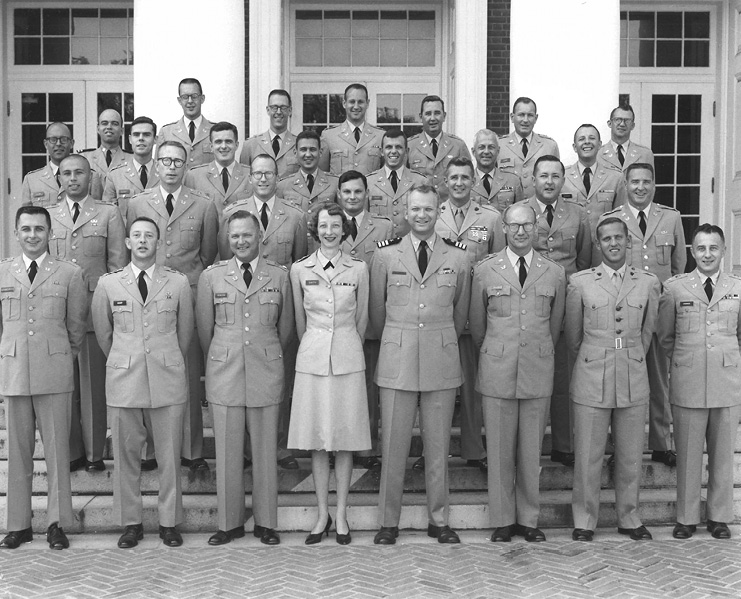 Since the Army was gender-segregated in the 1940s, 1950s, and 1960s, the opportunities for women to soldier were limited because of their decidedly second-class status. Additionally, not only were most women in a separate organization—the Women’s Army Corps (WAC)— but also Congress prohibited women from serving in combat units, commanding men, and being promoted to general officer.1 Additionally, until the 1970s, commanders had the authority to involuntarily discharge female Soldiers due to pregnancy, childbirth, or becoming parents through adoption.2 Despite these restrictions, there were 9,000 women in the WAC by 1960 and 12,500 by 1970.3 However, since there were a total of 1.32 million Soldiers in the Army in 1970, this meant that less than 1 percent of the Army was female.4 Despite these low numbers, there were a handful of female lawyers in The Judge Advocate General’s (JAG) Corps, including Elizabeth R. Smith Jr. This is her story.

Born in Ravenna, Kentucky, on December 27, 1926, she was the only child of R.W. and Elizabeth Ratliff Smith. Colonel Smith really was a “Junior” because she was named after her mother.6

Smith grew up in Irvine, Kentucky, and entered the University of Kentucky in 1944 in a six-year, combined Bachelor of Arts and Bachelor of Laws degree program. After graduating in 1950, motivated by patriotism during the Korean War, adventure, and a desire to get away from the small Kentucky town in which she had grown up, Smith applied to join the WAC. She was accepted, commissioned as a second lieutenant, and completed the WAC basic course at Fort Lee, Virginia.7 Although she was a lawyer, Smith did not request to be assigned to an Army legal office, much less ask to do legal work. As she put it:

Now I had no promises of being a lawyer in the Army, but it just did not make sense to me that the Army, being a somewhat sensible organization, would not at some point use my talents, my ability, my training, my education. So, I figured I would just take the chance in coming in and doing whatever I had to do and eventually working my way into the law.8

Smith served first at Fort Eustis, Virginia, before volunteering to serve overseas and being reassigned to Heidelberg, Germany, in March 1954. The plan was for now First Lieutenant (1LT) Smith to work as a supply officer in a quartermaster unit in U.S. Army, Europe, but when the senior WAC officer in Europe learned that Smith was an attorney, this officer decided that it was not appropriate for Smith to be a supply officer.

The Northern Area Command, located in Frankfurt, Germany, was “desperate for a lawyer” and so, instead of serving as a supply officer, Liz Smith was assigned to the Northern Area Command legal office.9 She spent three years in Germany. While Smith worked chiefly as a legal assistance officer, she did have the opportunity to do administrative law, and she served as a trial and defense counsel at special courts-martial. One of her JA colleagues was 1LT John J. O’Connor, the spouse of the future Supreme Court Associate Justice Sandra Day O’Connor.10 But while Smith was serving as a lawyer in the staff judge advocate’s (SJA’s) office, she was not formally assigned or even detailed to the JAG Corps; Smith remained a full-fledged member of the Army WAC.11

In 1957, 1LT Smith applied to attend the 25th Special Class (the forerunner of today’s Judge Advocate Basic Course). She was accepted and completed the course, graduating first in in her class.13 A letter to Smith from Major General George Hickman, Jr., then-serving as The Judge Advocate General, congratulated 1LT Smith for finishing number one in the Special Class. Hickman also wrote that this “award has added significance when it is realized that you [Smith] were competing with 54 other officer lawyers who graduated from better law schools.”14 One has to wonder what Liz Smith thought of this backhanded compliment.

First Lieutenant Smith then was assigned to Fort McClellan, Alabama, where she was an instructor in the General Military Subjects Division, WAC Training Battalion. She taught military justice to the WAC basic trainees. Smith tried “to use physical demonstrations of [criminal] offenses and do it in sort of a dramatic fashion so that it wasn’t so boring.”15 When talking about attempted arson, for example, she would hold up a box of matches and then strike matches in front of the trainees to get their attention.16

Promoted to captain in 1958, Smith then served a one-year tour as the commanding officer of Company B, WAC Training Battalion, “an opportunity she thoroughly enjoyed.”17

Captain (CPT) Smith next served at Fort Leavenworth, Kansas, where she was the only female JA in the SJA’s office. She still had her WAC status but was now temporarily detailed to the JAG Corps for a period of three years.19

In 1961, at the urging of Major General Charles L. “Ted” Decker, the Army formally allowed qualified WAC officers to be permanently detailed to the JAG Corps. Smith applied for the new status, which was approved. This permanent status with the Corps meant that, while she remained in the WAC, CPT Smith’s career was now managed by the JAG Corps rather than by the WAC Career Management Branch. It also meant that CPT Smith was authorized to wear JAG Corps brass on her uniform collar.20

Captain Smith’s next assignment was to The Judge Advocate General’s School, U.S. Army (TJAGSA), where she worked as the Deputy Director of the Academic Department. The only female lawyer on the staff, Smith “managed the school’s academic schedule, guest speakers, coordinated support to the academic departments, and otherwise assisted in the administration of the academic program.”21 It was not easy to be the lone woman at TJAGSA, especially as not every male soldier was convinced that women should be in Army uniforms. Despite this, during her time there, she promoted to the field grade ranks. Certainly, Major (MAJ) Smith’s supervisors were aware that some Soldiers held those views, as reflected in this senior rater comment from Colonel John F. T. Murray, the TJAGSA Commandant: “For anyone with a built-in prejudice against women lawyers, I suggest a tour with [MAJ] Smith. She will overcome the prejudice and demonstrate why she is an outstanding officer.”22

After her promotion, Smith completed the 13th Career Course (today’s Graduate Course) in 1965, finishing in the top third of the class. She was the only female in her class of twenty-five to thirty JAs. After graduating, Major Smith joined the Military Affairs Division, Administrative Law Division, Office of The Judge Advocate General. In her opinion, “it was one of the best assignments you could have.”23 As she put it in her oral history:

It was far better than the Military Law Division, International Law, or anything else because a commander’s “meat and potatoes” is running his post, camp, or station, and he is going to be in the area of administrative law far more than the courts-martial. Anybody can do courts-martial. I think it takes real talent to do Administrative Law.24

In December 1966, then-Lieutenant Colonel (LTC) Smith left the Pentagon for an assignment as the first legal advisor for the U.S. Army Recruiting Command (USAREC), then-located in Hampton, Virginia. Her job as the command’s first CJA was challenging as the Vietnam War was in full swing. The increasing unpopularity of the draft meant that Smith and her staff wrestled with a variety of issues, including sometimes-violent anti-war demonstrations at Armed Forces Examining and Entrance Stations (AFEES) and handling responses to private habeas corpus actions used to impede the induction of men who had been drafted. Lieutenant Colonel Smith “had a booming telephonic legal business, all day long, all over the country,”25 as she and her staff were providing advice and counsel to forty-seven recruiting main stations and seventy-three AFEES stations—almost all of which were not on military installations.26

When USAREC moved from Virginia to Fort Sheridan, Illinois, LTC Smith went with it. On 10 July 1972, while still serving as the CJA at USAREC, Smith made history as the first female JA to reach the rank of colonel (COL). This was a remarkable achievement, as there were only thirteen female colonels in the entire Army—of nearly 811,000 Soldiers.27

The following year, after the draft and inductions ended, COL Smith helped USAREC transform itself so it could better focus on recruiting for an all-volunteer Army. She was particularly interested in institutional changes at USAREC that would create more opportunities for women in the Army. In any event, COL Smith was so valued by the command at USAREC that she stayed on as its top JA until she retired—with more than twenty-six years of service—on 31 May 1978, the last twelve years having been exclusively at USAREC.28

When asked to reflect whether she thought of herself as “forging a new road for women” as the “first and only colonel” in the Corps in the 1970s, COL Smith replied:

Only in the sense that I did not ever want to do badly. I wanted to do well because I knew that I had a unique position . . . but my main concern was never letting down women . . . because if I did badly, it would perhaps hold back other women, in some way, in the eyes of men who would question whether a woman could do the job.29

In retirement, COL Liz Smith played golf (she described herself as “fair” at the game) and collected opera records. Opera, in fact, was her passion; the last month of her tour of duty in Germany, she went “to the opera every week.”30 Colonel Smith died at her home in Newport News, Virginia, on 8 July 2007. She was 81 years old. She never married and left no survivors. TAL

Mr. Borch is the regimental historian, archivist, and professor of Legal History and Leadership at The Judge Advocate General’s Legal Center and School in Charlottesville, Virginia. This Lore of the Corps draws from a previous Lore of the Corps in The Army Lawyer, issue 1, 2020. See Fred L. Borch, Women in the Corps: A Short History of Female Judge Advocates, army kaw., no. 1, 2020, at 13, 14–15.

5. For a comprehensive look at Smith’s career, see Major George R. Smawley, The First Female Colonel of the U.S. Army Judge Advocate General’s Corps: A Summary and Analysis of the “Oral History of Colonel Elizabeth R. Smith, Jr. (USA Retired) (1951–1978), 179 Mil. L. Rev. 171 (2004). Smawley’s article is based chiefly on the oral history of Smith completed in January 1989, which is located in The Judge Advocate General’s Legal Center and School library and available at www.jagcnet.army. mil/history.nsf.

26. Recruiters and personnel manning Armed Forces Examining and Entrance Stations (AFEES) faced demonstrators who threw real and artificial blood on them and their files, and one AFEES was bombed. Smawley, supra note 5, at 193.